How Bravo’s Kyle and Amanda Do Date Night at Home

Yes to bodega flowers and music. No to takeout containers. 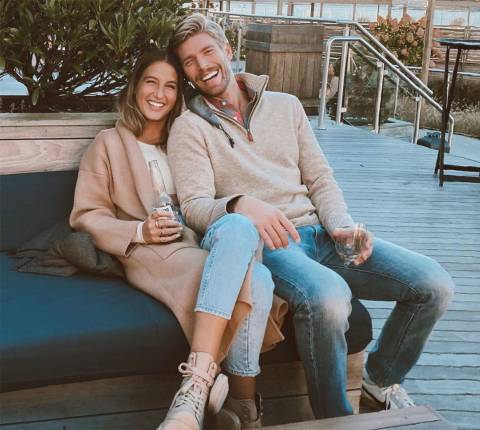 Kyle Cooke and Amanda Batula don’t have a ton of time to spare, to put it mildly. But the stars of Bravo’s “Summer House” and “Winter House” (the second season is currently airing) still prioritize date nights.

“We both live crazy lives between filming two TV shows and running a start-up,” Cooke says of Loverboy, his beverage company. “We have two dogs, too, so that adds to the craziness.”

No matter. They squeeze in romance at home — which involves bodega flowers, a curated playlist, and, always, a Caviar-delivered meal. They aren’t the only ones: Caviar has joined forces with the women-first dating and social networking app Bumble to help cater date nights in cities across the country with an exclusive Bumble Date Night Collection on Caviar. 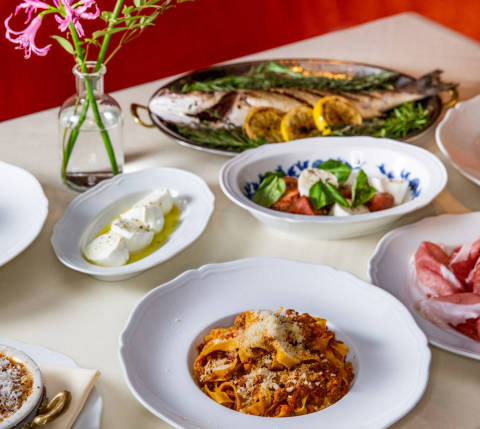 Cooke and Batula have long been leaning on Caviar’s premium restaurants to zhuzh up their delivery. “We love that we don’t have to worry about making reservations and can enjoy a relaxing dinner at home with a restaurant-quality meal,” Cooke says.

And, while they’re constantly sorting through their list of go-to dishes from such New York City favorites as Sant Ambroeus and L’Artusi, Cooke acknowledges that Batula does most of the ordering. “I get overwhelmed looking at thousands of options, and we usually pick something Amanda is craving,” he says, adding that the couple also love ordering from Peking Duck House, DOMODOMO, and Cipriani.

What always appeals? An epic Italian dinner from a stellar place like Via Carota or i Sodi.“ Amanda loves pasta and I dabble,” he says. “I try to watch my carbs, but I’m a sucker for a chicken piccata or something as simple as chicken with a white wine– mushroom sauce.” 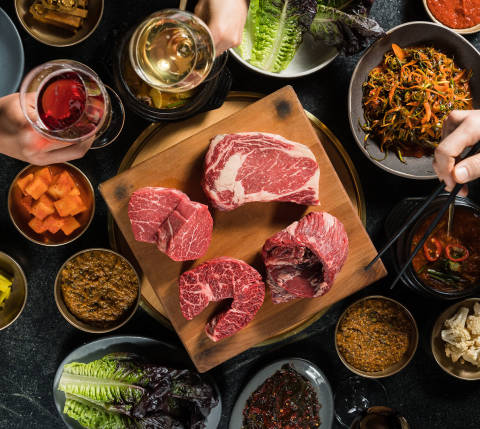 Cooke says Batula tends to order her favorites, which include artichokes and fried goat cheese balls. On other nights, a steak dinner appeals most. He loves the steak from Cote, a Korean steakhouse, and Minetta Tavern.

“I’m a sucker for a good steak,” he says. “That’s something that is a pain to do well in a New York City apartment and do it justice. That’s where Caviar really comes in!”

On days when they don’t feel like red meat, there are plenty of other options.

“If I’m feeling like I want to mix it up, or when I’m trying to eat on the healthier side, I’ll order salmon,” he says. “You can get that almost anywhere, and it’s so good for you. Or if there’s a special and it sounds good, I’ll suggest we throw it in. For example, if a restaurant says they have this incredible warm chocolate chip cookie, I’m a sucker for that.”

He loves a few other sweet treats too: “We’ll occasionally order mochi ice cream, and Amanda loves a good cannoli. Not all cannoli are created equal, by the way, but let’s agree: A good cannoli goes a long way.”

How to Turn Delivery Into a Date

Styling your own date night at home requires an eye for a few details. Here, Cooke sketches out the five most important things to remember when you’re ordering in date night via Caviar. 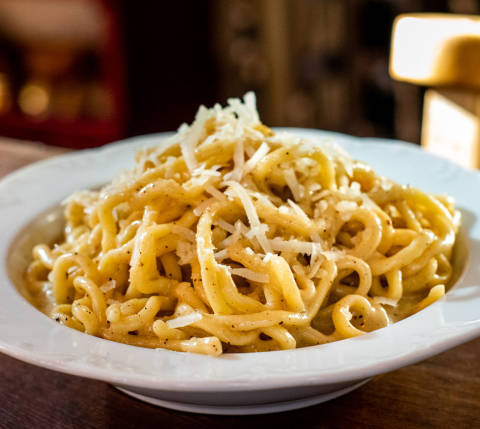 Music sets the tone for the night, whether it’s ’90s throwbacks, classical music, jazz, or something you can sing along to. “I’m a big music guy,” Cooke says. “If I have a little music on in the background instead of the TV, that’s an easy way to take the mood from a basic night in to a date night.”

2. Pick up flowers for the table.

No matter what’s in season, flowers can take your table from blah to gorgeous. “When Amanda picks up a bouquet from our corner bodega, it adds to the mood of the night,” Cooke says.

“If you don’t take the food out of the plastic or paper packaging and plate it on your nice dishes, before you know it you’ll be tempted to plop down on the couch and inhale all this delicious food while you watch TV,” he says. “I truly believe that just because you’re not going to a restaurant and not cooking doesn’t mean you can’t set the table, light the candles, and break out a nice bottle of wine. Soak it in and make it count.”

4. If you’re going to eat and Netflix, pick your shows carefully.

Cooke admits that every now and then he and Batula will catch up on some Bravo shows while they’re enjoying their dinner date. But they’ll only watch certain shows. “Watching a true-crime series like the Dahmer show on Netflix might not be the best option! When I’m watching a movie, I want to be done with dinner so I can solely focus on it,” he says. “It’s fun to watch something lighthearted while eating dinner — definitely nothing too intense.”

5. Be equitable about the cleanup.

For this couple, there’s one hard-and-fast rule that always holds: The person who pays for dinner isn’t the person who ends up cleaning up. “That means it’s usually me cleaning up since Amanda is often figuring out the restaurant and paying for it,” he says. “If we make it a Caviar night, I always clean up. After all, if you cook, your partner should do the dishes. So, if your partner is going to pick the restaurant and buy the food, you should be the one putting the dishes in the dishwasher.” 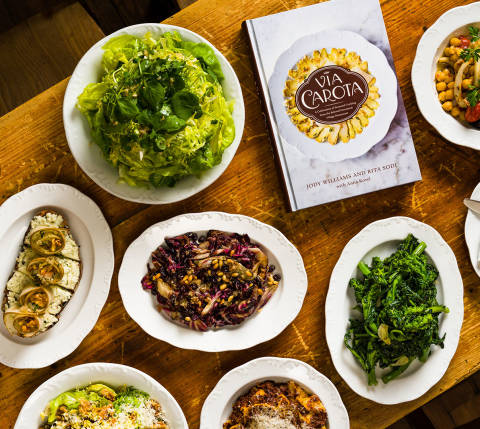 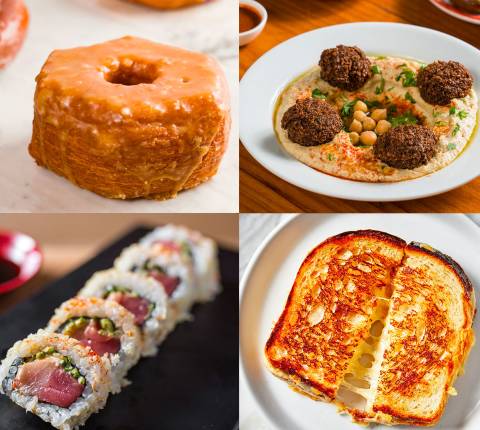 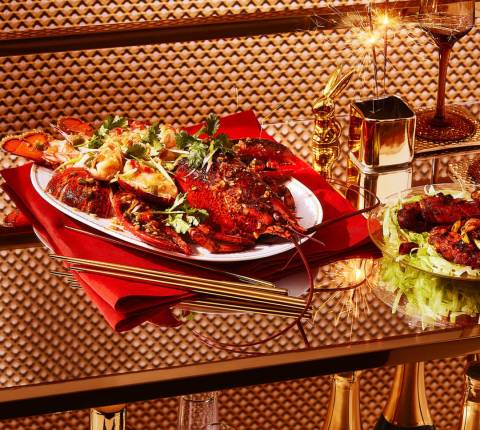 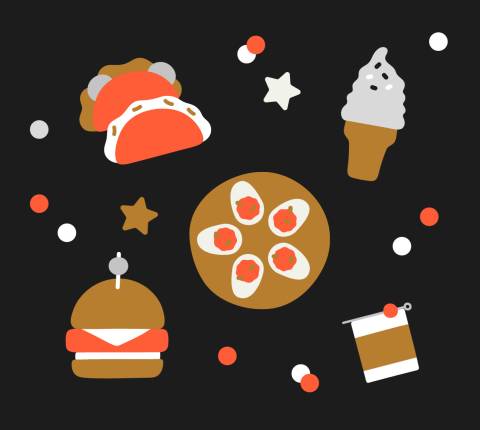