The 20 Best Pizzas in Chicago on Caviar

In a city known for its extremes of thick and thin pizzas, most Chicagoans find their ideal somewhere in the middle. Numbers don’t lie. Our list of the best pizzas in Chicago is based on data and shows which pies get ordered again and again. Surprise — it’s not all the gut-bomb deep-dish pizzas you might expect from Chicago. Whether it’s deep dish or ultra-thin, New York style or Neapolitan, these are the Chicago pies you love the most. The specialty of this house is a version of New Haven-style apizza, which are thin-crusted, oblong, and available with or without cheese. Of course there are clam pies, but also look for Hot Doug’s Atomic sausage if you like a good burn. The large-format pies here are excellent additions to parties.

The pies at this Logan Square fave arrive thin crusted, painted with red, white or pink sauce, and finished with any number of gourmet toppings, such as n’duja (spicy, spreadable Calabrian sausage), smoked provolone and Castelvetrano olives. Sauce lovers will appreciate that you can add dipping sauces such as alfredo, spicy marinara or buffalo to your order. This grab-and-go restaurant, which started as a carryout window for Formento’s, has been a godsend for West Loopers who don’t want to think too hard or scroll though an endless menu. Both Sicilian- and New York-style pizzas come whole or the slice, and feature toppings no more exotic than pepperoni or fennel sausage. A small selection of hot and cold sandwiches and fun sides (try the roasted broccoli salad) round things out.

This is the restaurant that developed stuffed pizzas 50 years ago as an alternative to traditional deep dish. Cheese and toppings make gooey magic between two crusts under a final slathering of tomato sauce. But tavern-cut thin-crust pizzas (and super-thin crust) are also available. If you like a slightly fluffier pie, opt for the “rustic” variety.

The name of the game here is Neapolitan pizza. The cornicione (rim) will be puffy and dotted with char, the fresh mozzarella milky and melty, the sauce bright, and the basil plentiful. Here’s where you want to splurge on a pie made with mozzarella di bufula or black truffle puree. Great salads and pea arancini are always welcome add-ons. This breezy Lincoln Park destination has such a broad menu that you might overlook the superlative pizzas made with dough that ferments for 18 hours, ensuring a crisp crust with a rich, tangy flavor. The shaved mushroom pie comes with Gruyère cheese, while the prosciutto and egg has a base of Parmesan cream.

Some of the town’s most popular carryout pizzas come from this Gold Coast stalwart, best known for its stiff drinks and filet sliders. Once you order one of the house Roman-style pan pizzas, it’s easy to see why. The thick-crusted, crispy, oozy, and cheesy rectangular pies are priced like appetizers but can easily feed two, especially with a creative salad to share. Or just skip the salad and get your greens via the kale and truffle version loaded with baby greens, Parmesan cheese, and shaved black truffles. Chicago may be the greatest pizza city in the country, but it can be a hard place to grab a simple slice. That’s one of the reasons Logan Square residents love this place. The Purist has fresh mozzarella, basil, and balsamic drizzle, while the Boiler Room signature features meatballs and spicy giardiniera. For vegans, the slice with gobs of veggies and vegan mozz is one of Chicago’s best go-tos. Large 19” pies are available, as are a limited number of 10” pan pizzas each day.

The creative 14” pies at this Logan Square fave pair perfectly with an order of roasted Brussels sprouts and a sunshiny cranberry orange salad. The Butternut with sweet squash, Gouda cheese, and brown butter always gets us going, and the Fancy Nancy with its entire ball of burrata in the center proves that there’s never enough cheese.

This Chicago original — with two locations in Wrigleyville and Bucktown — turns just about everything into pizza, and we can’t argue with deliciousness. The Mac combines elbow noodles with four cheeses and green onions on a white sauce-based pie. The Buff Chick arrives festooned with bits of fried chicken, blue cheese, and hot sauce. Consider the Dauphinoise (thinly sliced potatoes and crème fraîche) or the Banh Mi Baby One More Time (Chinese-seasoned bacon, pickled veggies, herbs). Nearly all can be made vegan. Owner Robert Garvey is a native New Yorker who has spent years perfecting his long-fermented dough so that it achieves the right mix of pliancy and crackle. He’s all about the perfect bite that offers a mix of crunch and chew. His Cup and Char pepperoni is best in show, with a fiery backbone of Calabrian chilies. Other pies come with ingredients as diverse as duck prosciutto and roasted vegetables. If you’re a fan of the classic combo of prosciutto and arugula, this is your new favorite pie.

This restaurant may be best known for its swank riverfront location, but don’t think about overlooking the pizzas, which are hand-tossed, crisp on the bottom, and gorgeously puffy and blistered around the rim. Go for an Italian classic, such as the Pugliese with spicy fennel sausage and rapini or a picture-perfect Margherita. There’s plenty else on the menu to complete the meal. Think burrata and red pepper jam or a big plate of top-tier prosciutto with whipped ricotta.

Fact: Brewpubs often have the best pizza. Maybe that’s because the same care that goes into sourcing grain for the beer extends to the dough. Here, the kitchen sources the freshest local flour from Janie’s Mill in Ashkum, IL, to make a stupendous lineup of pies. This PIzza Has a Leek in It also has arugula, rosemary, and garlic. Everyday I’m Brusslin takes the sweet/tangy route with pickled onions, bacon, and balsamic to offset that distinctive Brussels sprouts twang. Purists may be surprised at some of the combinations this kitchen comes up with, but when you’re in the mood for Homeslice, there’s nothing like it. The Smoke Show with blackened chicken and jalapeños on a cream cheese base, the Carnit Za with pulled pork, tortilla chips, and cheddar on a black bean base, and, well, you get the point. There are some perfectly normal pizzas, too, but really the sky’s the limit here.

River North’s massive Italian food emporium makes one helluva Neapolitan pizza. This is the real deal with San Marzano tomatoes, mozzarella di bufula and 00 flour in the crust. As in Naples, these pies come stretchy, puffy, and perhaps a little puddly in the center, with flavors so fine-tuned you’ll be instantly smitten. The capricciosa with prosciutto cotto and mushrooms is an instant trip to Italy. The calzone is a thing of beauty. This Chicago outpost of a much-loved Roman chain serves the pizza al taglio popular in Italy’s capital city. These pizzas, cooked in rectangular pans, have sturdy yet puffy crusts and a variety of toppings that beckon for your attention. Sold by weight in the store and by number of slices for carryout, this pizza begs to be sampled in as many flavors as possible. Assemble a group and go to town.

What happens when a Michelin-starred chef puts his mind to creating pizza for the carryout market? You get something like this one-of-a-kind spot where thick-crusted Sicilian pies come with the kinds of toppings you won’t find elsewhere. Oriole chef Noah Sandoval oversees this casual rock-and-roll spot where one pizza arrives with miso onions, mushrooms, and black garlic, and another features roasted chili potatoes and pepita pesto. Pay attention to the weekly specials, and you may be rewarded with a veggie fantasia inspired by a trip to the Garfield Conservatory.

Here’s a suburban treasure, a St. Charles pizzeria where the classic pies are so good that they draw fans from all around. The Bianca pizza, with imported burrata, rapini, and special sausage made by a local butcher, always satisfies. The signature pie is the Trulli, a traditional dish from Puglia featuring olives, anchovies, and capers. During the earliest days of the pandemic, Matt Sussman turned his restaurant, which has previously specialized in small plates and great wines by the glass, into a carryout venue for gourmet pan pizzas. Once guests started returning to dine in, they still wanted the pizza. Get the special pie of the day and outfit it with some of the other great dishes that have returned to the menu.

Yes, that Roberta’s. Located in the Urbanspace food hall, this counter-service spot is a Chicago branch of the Bushwick restaurant that opened a new age in the world of New York pizza. Here the crusts are light and crisp, and the toppings show personality without going crazy. The Cheesus Christ adds creamy taleggio cheese, black pepper, and heavy cream to an otherwise standard pie, while the Bee Sting combines spicy soppressata, chilis, and honey in a combo you won’t soon forget. 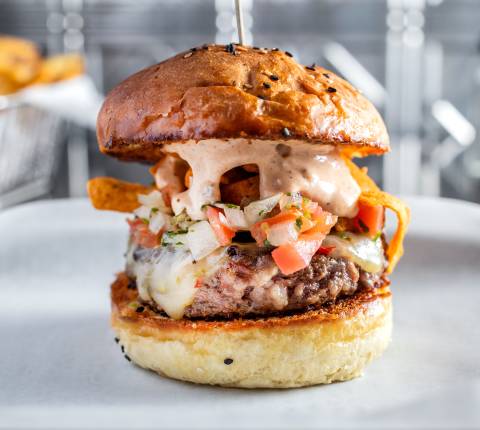 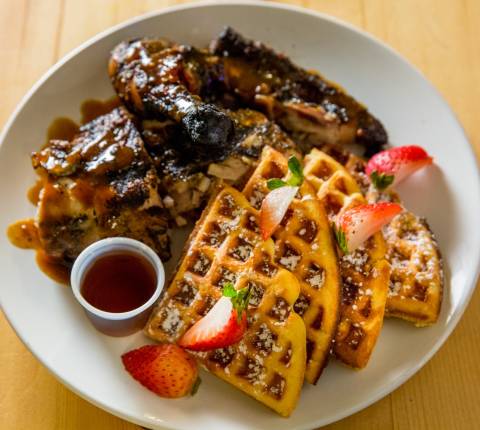