The dish so special that, well, we’re named after it. 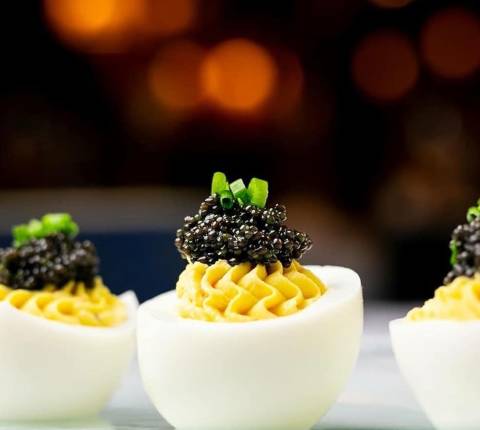 Our company name is a double-edged sword. If you’re searching online for restaurants on Caviar that deliver to your area, you might get results for the sturgeon stuff instead. Or if you’re craving caviar the dish, you may wind up with all the Caviar restaurants near you. But what if you’re in the mood for both? As in, caviar … on … Caviar. It’s a win-win for all. Think hand rolls with a side of caviar, crispy hash browns crowned with the fancy fish eggs, and even some clever riffs that don't actually contain the salty delicacy but are just as satisfying. You can dig into all this and more in our list of the best caviar dishes across the country, ranked in order of popularity below — and all on Caviar.

Nicknamed the caviar of the south, pimiento cheese is the star of this loaded breakfast sandwich at Mike & Patty’s. The creamy spread comes slathered on a craggy homemade English muffin alongside sausage and a fried egg. It’s a decadent way to start the day. 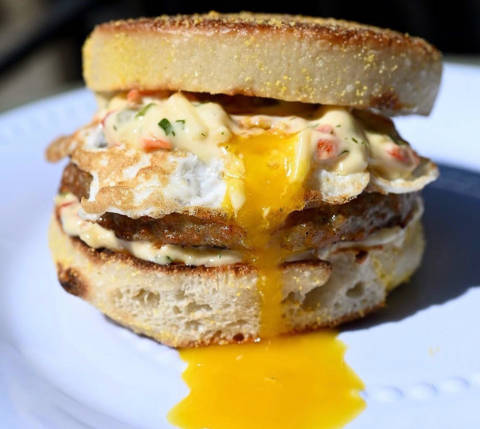 2. Side of Caviar at Nami Nori, New York City

Choose your own caviar adventure with these little tins from Nami Nori. Spoon the caviar over one of the restaurant’s creative temaki, or save those briny fish eggs to adorn your scrambled eggs the next morning. If you get the 50-gram tin, you can do both. 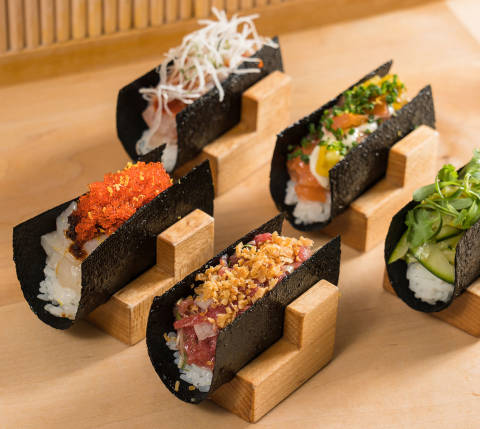 Just as legendary as the vibes at Nobu in New York City is the tuna tartare. It’s made with fatty, melt-in-your-mouth toro, crowned with Imperial caviar, and served alongside wasabi soy for a savory-spicy finish.

This luxurious dish from New York City’s Maki Kosaka is a study in textures. Ocean-fresh uni from Hokkaido is all silky richness, while the bright, poppy caviar brings a saline contrast. Now thisis a rice bowl.

5. One Egg Toast and Caviar at Nougatine at Jean-Georges in New York City

Of course we had to include this iconic dish from chef Jean-Georges Vongerichten at New York City’s Nougatine. Make it the star of your at-home tasting menu, or order it a la carte. Golden orbs of egg yolks are sandwiched between two toasted slices of housemade brioche, then topped with a massive dollop of the good stuff, Petrossian caviar.

6. Blinchiki With Caviar at Cinderella Bakery & Cafe in San Francisco

These delicate Russian crepes are the stuff of fairy tales. At Cinderella Bakery & Cafe in San Francisco, they’re presented with a swirl of sour cream and caviar of a different sort: bursting, bright-red salmon roe. 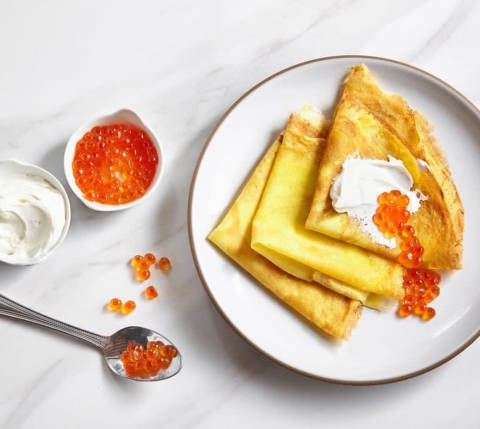 This dip is a Greek speciality: Tiny, orange carp roe are whipped with olive oil, lemon juice, and some kind of starch into creamy goodness. And it’s not to be missed at Zorba’s Taverna in Philadelphia. You’ll want an order to keep all to yourself.

The inventive plant-based caviar at Le Botaniste in New York City isn’t attempting to pass as traditional caviar — though it is studded with sunflower seeds for a roe-like texture. Instead, it stands on its own as a vibrantly hued, pillowy beet spread, ready to be slathered all over toast or whatever else you fancy. It has a loyal following among locals for a reason.

Ken Oringer and Jamie Bissonnette, the chefs behind Little Donkey in Boston, came up with this playful sandwich out of necessity. They didn’t have time to make blini to eat with their caviar, so they just threw the sturgeon roe on potato rolls, and a star was born. At the restaurant, the sandwich is gilded with whipped butter and a little bit of chives. 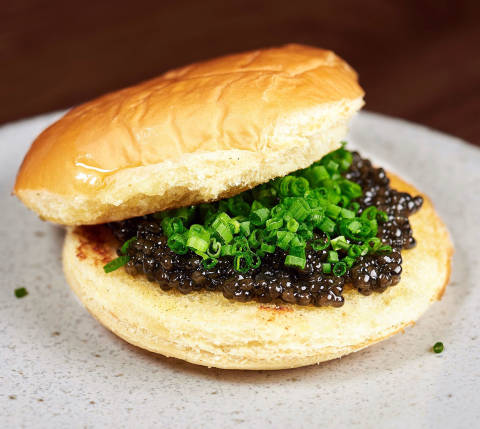 The deviled eggs at Lure Fishbar in Chicago aren’t simply sprinkled with the requisite paprika.  They're shimmering with caviar. This high-low combo proves that eggs — of both fish and chickens — are made for each other. 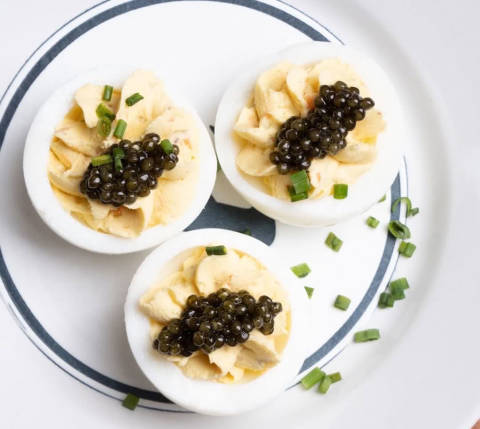 You can order the full caviar service from Pilot in Brooklyn if you’re feeling fancy, but the crispy hash browns, brimming with smoked trout roe, creme fraiche, and pickled red onion, fulfill any caviar craving.

12. Cucumber and Caviar at Café Riggs in Washington, D.C.

This is the snack of your hangry daydreams: a platter of potato chips flanked with smoked trout roe, lemony creme fraiche, and refreshing cured cucumbers from Café Riggs in Washington, D.C. Add a bottle of white wine for a very exciting afternoon.

At Mari Vanna in New York City, caviar isn’t merely a snack or a garnish. It’s a splurge taken seriously. The opulent caviar services — yes, plural — include blinis and all the accouterments, like finely chopped hard-boiled eggs, chives, and sour cream. Pick your level of caviar extravagance. If you’re not a caviar connoisseur, start with the more affordable Golden Osetra, which is rich and clean-tasting. If you’re going to do it up, get the Troyka, which has all three caviars on offer. Good to know: It’s one of the best party starters you can have delivered to your door. 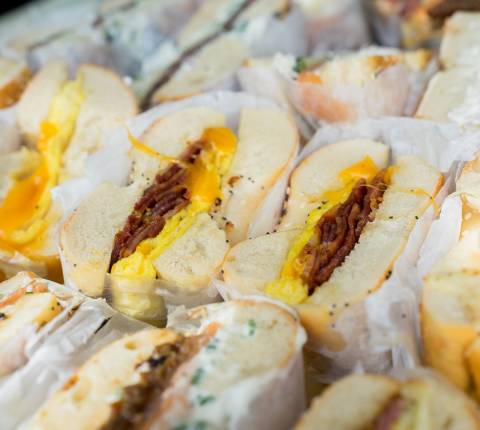