The 20 Buzziest Restaurants in Los Angeles 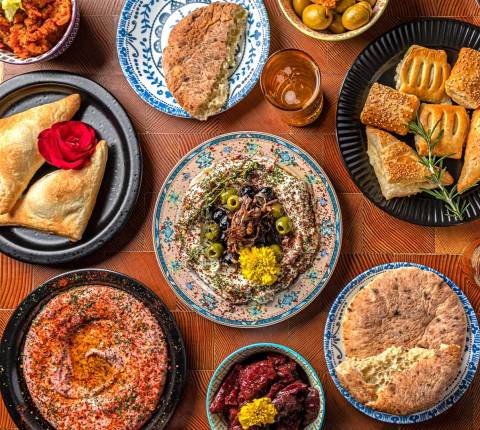 LA is home to many of the world’s biggest celebrities, so it makes sense that it would be a city that is chock-full of hot spots that serve food as creative and stunning as the stars. From pasta palaces to hybrid concepts with accents from all over the globe, here are the 20 buzziest restaurants in Los Angeles on Caviar now.

Liz Johnson and Will Aghajanian, formerly of Nashville’s much-lauded Catbird, have teamed up again to breathe new life into a legendary Los Angeles restaurant, Ye Coach and Horses, which shuttered after 73 years. Order the pasta all Herman, Horses’ spicy spin on alla vodka. The creamy sheep’s milk cheesecake topped with seasonal fruit is the ending you need.

This venerable Italian spot is as synonymous with Los Angeles as the Hollywood sign. Opened in 1956, La Scala has hosted countless celebs and served countless orders of their signature dishes, such as the famous salami chopped salad. They serve a splendid list of Italian greatest hits, like eggplant parmigiana, and pasta lovers will find themselves struggling to choose from the more than two dozen offerings.

The incredibly new and incredibly popular Yangban Society in the Arts District has already attracted droves of hungry diners with its blended Korean-American deli/super/night market concept. The fare here is hearty and expertly seasoned, whether your dish is small or large, from the griddled potato bread to the braised short rib. Take advantage of the extensive and interesting beer, cocktail, and wine menus.

De La Nonna is a brand new market-driven pizza restaurant in the heart of Los Angeles’ Art District. They serve personal-sized pan pizzas that we might as well go ahead and call focaccia. (They do!) The pepperoni is piled high with cured meat and the Sicilian, crowned with pine nuts, capers, and olives, is a surprising vegan treat. 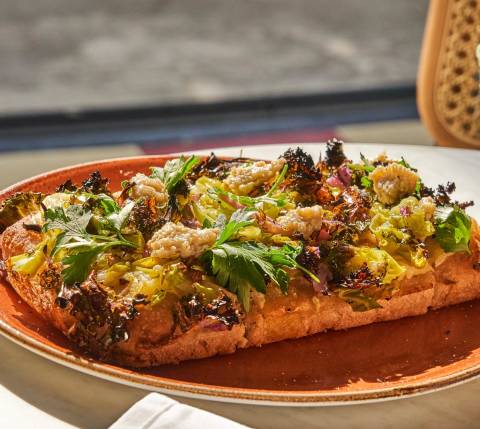 Chef Kris Yenbamroong set out to create “food to facilitate drinking and fun-having amongst friends” – and he succeeded with this Silver Lake restaurant. The Thai fare is boldly flavored and honors traditions while also cooking outside the box. Pad Thai and papaya salad sit alongside “party wings” and the world-famous fried chicken sandwich with papaya slaw and ranch dressing. 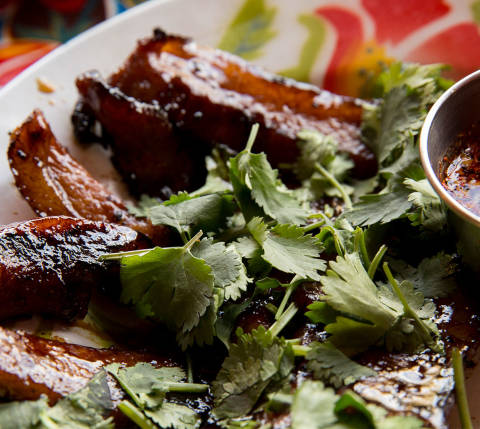 Founded by Los Angeles native Tal Zaiet, Mazal is a true family affair; Zaiet’s close relatives helped him open this Israeli-inspired restaurant in Lincoln Heights in 2020. The menu here is all vegetarian and the dishes are built to share, making it a perfect pick for a group order. The hummus and bourekas are obvious choices, but be sure to veg out some more with cumin beets, Moroccan carrots, and the cauliflower salad. 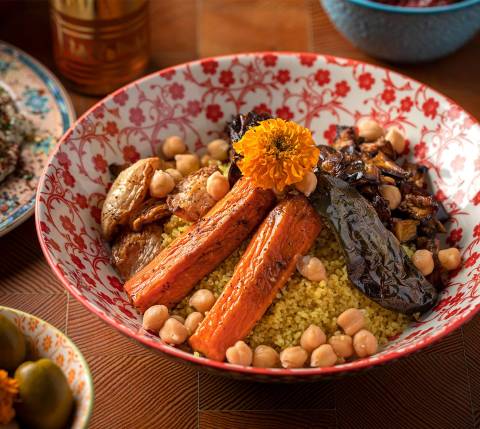 Brought to you by James Beard Award-winning chefs Jon Shook and Vinny Dotolo, Jon & Vinny’s has been serving Italian-American comfort food since 2015. This all-day restaurant wood-fired thin pizza from breakfast (with potatoes, eggs, and Parm) to dinner. Regulars also rave about the decadent spaghetti with six-hour bolognese and ricotta ravioli — all made in-house. 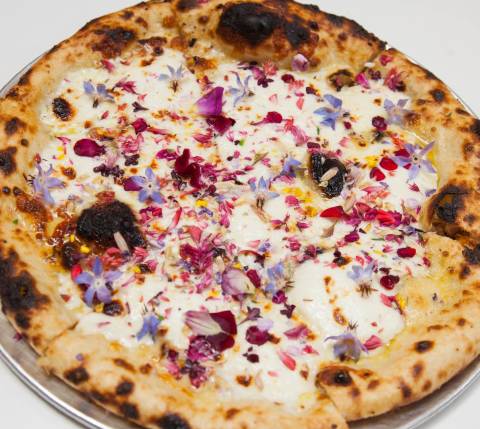 If the Nashville hot chicken at Hotville makes you feel like you’ve been transported to Music City, it’s with good reason. Owner Kim Prince’s uncle Thornton helped kick off the tradition nearly 100 years ago. This new-ish Crenshaw restaurant opened in 2019 and has been bringing an authentic slice of the south to Angeleno’s mouths ever since. Consider yourself warned: Choose your spice level wisely.

Sometimes we can’t remember life before Sqirl and we don’t really want to. The popular spot changed how we brunch – and what we drink! Sqirl boasts a super-impressive beverage list, from coffees and teas to juices and tonics. Grab one of their famous pastries, like the strawberry-malva pudding cake for a sweet treat or a pint of the stick-to-your-ribs chicken and rice porridge.

Located in Historic Filipinotown, Grá, which opened in 2019, serves wood-fired organic sourdough pizza. They offer nearly a dozen inventive pies, including a savory-sweet white pizza, a vegan offering with eggplant, piquillo, and fermented relish, and a kimchi pie with mozzarella and goat cheese. Grá specializes in natural wines so if that’s your thing, grab a bottle or two.

Shogo Noshi opened this long-beloved spot in 1983 and helped ignite the town's eternal sushi craze. His original spicy tuna roll continues to win accolades, so you must order one to savor excellence. The California roll is the real (crab) deal here, and we cannot pass up the sublime blue crab hand roll. You won’t either!

Is Parks a Korean barbecue restaurant? You bet. But it’s much (much!) more than that. Renowned for almost 20 years for their barbecue beef short ribs, Parks also serves everything else you need to complete an authentic Korean feast. Think beef short rib soup, kimchi stew, stone pot rib eye bulgogi, and more. The steamed egg makes any order a sure win.

Recently named one of the top 101 restaurants in Los Angeles by the Los Angeles Times, Petite Peso, serves thoughtful Filipino fare in the jewelry district. Chef Ria Dolly Barbosa is classically trained and has cooked at acclaimed restaurants, but she returned to her Filipino roots with this spot in 2020. There are build-your-own bowls and plates featuring mains, like chicken adobo, and sides like pancit as well as very fine lumpia.

Since 1947, Langer’s has been dishing up some of the world’s best pastrami. The #19 rye on full sandwich comes with coleslaw, Swiss cheese, and Russian dressing, but purists swear by the simple pastrami on rye with mustard. This is a complete New York-style deli, so don’t skimp on classics like potato pancakes, cheese blintzes, and chicken soup. 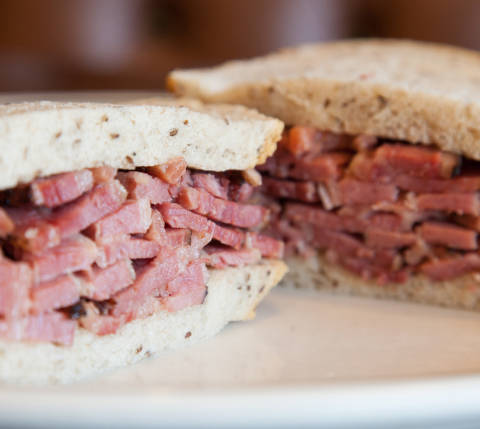 Since 2013, Nakul and Arjun Mahendro have shaken things up on the LA food scene alongside their father and executive chef Pawan Mahendro. Badmaash features a unique fusion of Indian street food and Toronto pub fare, with a hint of fine French and Italian cuisine. The menu features everything from samosas, saag paneer, and channa masala to the ultimate late-night snack, chicken tikka poutine.

After partnering on Dominick’s in West Hollywood, restaurateur Warner Ebbink and chef Brandon Boudet launched Los Feliz’s Little Dom’s in 2008. For a fun night in, Little Dom’s offers a pizza-making kit that serves two and comes with everything you’ll need to whip up their Margherita pies. The meatball sandwich with provolone and the chicken Parmesan are also excellent.

This sushi spot’s name translates loosely to “delicious” in Japanese – and it couldn’t be more on point. Opened in 2019, Oishi sources fresh seafood and produce daily. Start with the albacore fire ball if you can handle a little heat. Wrapped with avocado and drizzled with umami-rich eel sauce, it’s a rice-free roll that tops the list of favorites. End things with Oishi’s unmatched matcha tiramisu.

It’s likely you’ve heard a lot about Roberta’s, the outpost of the pizza lover’s paradise from Brooklyn. The signature pie combines tomato with mozzarella, Parmigiano, and caciocavallo — and is sprinkled with oregano and chili flakes. We recommend adding a salad for good measure — a fresh, crisp bowl of romaine with herbs, capers, bread crumbs, and a bright vinaigrette made from Fiore Sardo. 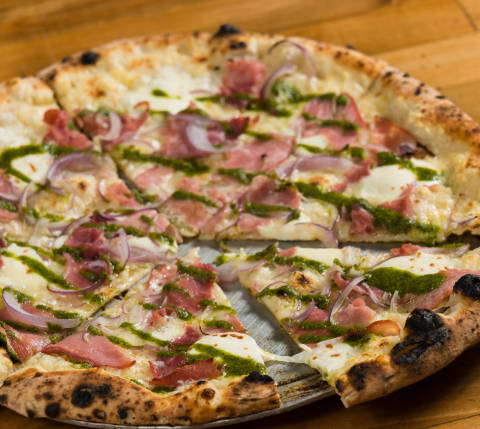 At the nautical-themed, new American restaurant Son of a Gun, owners and Florida natives Jon Shook and Vinny Dotolo — the duo also behind Jon & Vinny’s — dish up inventive, seafood-focused fare that reminds them of home. They’ve got everything from peel-and-eat shrimp to a standout lobster roll. Not feeling fishy? The fried chicken sandwich deserves all the accolades it receives.

For more than two decades, Nick + Stef’s has been serving mesquite-grilled slabs of meat to hungry Angelenos in downtown LA. The cuts range from grass-fed and Wagyu to dry-aged, and Angus. The robustly flavorful Jidori chicken shouldn't be overlooked. And they’ve got a killer burger that is dressed with truffle aioli, smoked bacon, arugula, maitake mushroom, bordelaise, and aged white cheddar. 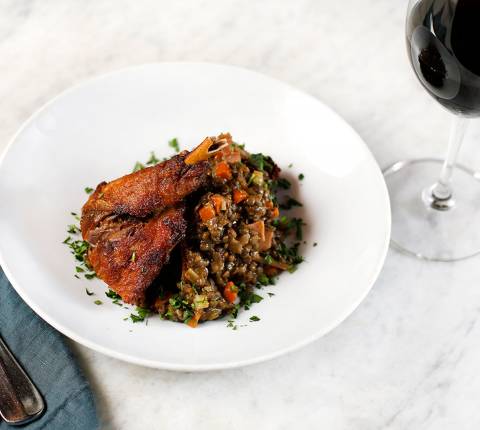 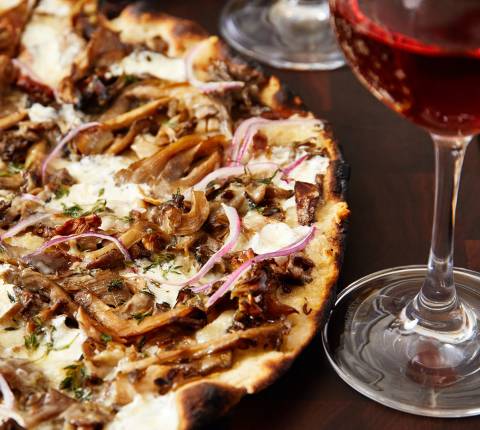 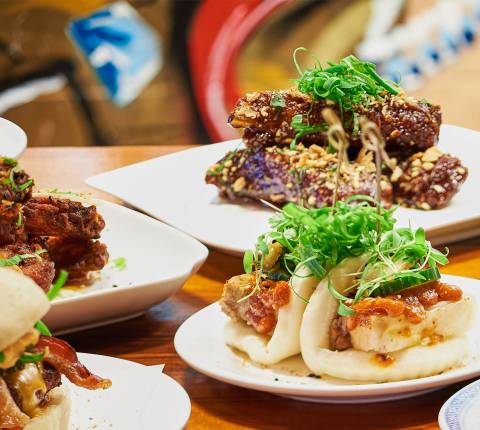