The 19 Best Brunch Spots in Chicago Available on Caviar

Based on what you order most. 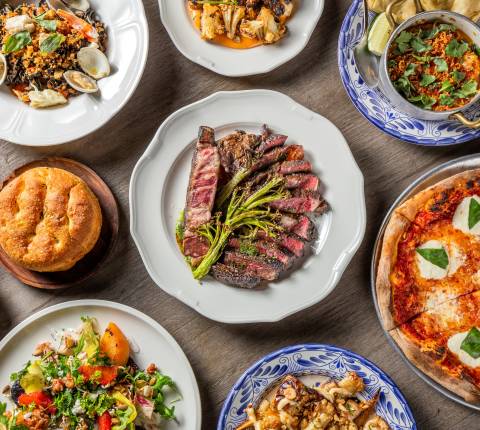 Brunch in Chicago can be a contact sport. The bleary-eyed patrons in boots and parkas gather in front of restaurants and jostle for position, waiting for their names to be called. But it doesn’t have to be this way. Chicago’s best brunches can all be enjoyed at home. These are the top brunch spots in the city, based on what Caviar diners order most. 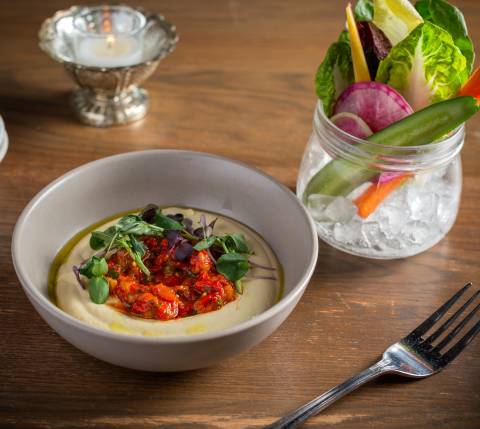 C.J. Jacobson’s modern Israeli cooking provides a healthy start to the day. You’ll want a pile of fresh, fluffy pitas and all the spreads, from charred eggplant to muhammara to creamy hummus with a variety of toppings.

Sure you can find classics like enormous omelettes, skillets, and bacon and eggs. But the (ahem) sweet spot on this menu is the selection of wild and wonderful pancakes and waffles with add-ins like Fruity Pebbles and Oreos. 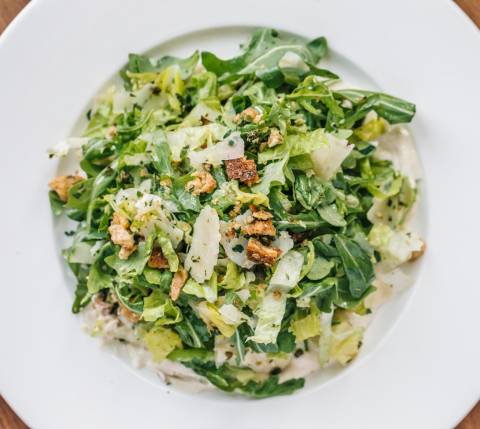 This super-popular mini-chain from Lettuce Entertain You Enterprises does “healthyish” better than anyone in town. Try the Caesar salad or the pepper & egg white sandwich, and you’ll be a convert.

You could get lost in the copious selection of breakfast tacos here and not look any further. The Biggie Smalls combines steak, eggs, and cheese with Welch’s grape soda, and eating is believing. Still, the OG is the best steak burrito going, always stuffed to steamy perfection. 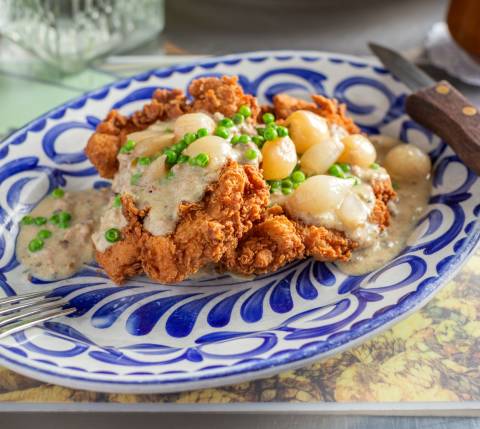 Every day is brunch day at this Wicker Park original that feels like a chef’s fever dream of a Texas roadhouse. The burnt-ends hash and chicken-fried chicken with green chorizo never go away. Other stellar items on the menu include a crispy-crunchy tlayuda the size of a hubcap, topped with beans, cheese, and olive-oil fried eggs.

Think of all the dishes you love at a modern Italian restaurant, then brunchify them. What do you get? Softly scrambled eggs with pesto burrata, sungold tomatoes, and pine nuts over crusty bread. Also a pizza morphed into a tarte flambée with bacon, onion, crème fraîche, and runny eggs. 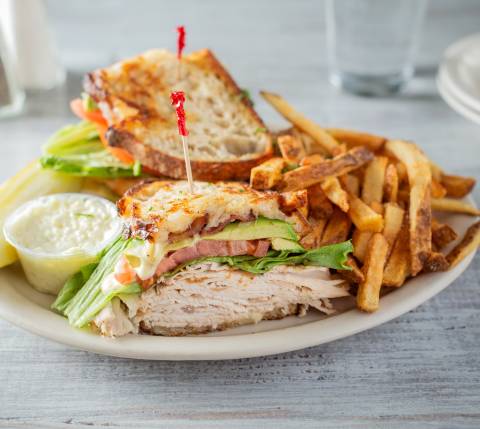 Since 1938, this Lincoln Park spot has both old-school Jewish deli and breakfast diner baked into its DNA, but it doesn’t skimp on modern brunch classics either. In other words, the sky’s the limit. So if you’re feeling matzo balls or chocolate chip pancakes or a ridiculously fun-sounding jerk chicken alfredo omelet, Franny has you covered.

The trim brunch menu shows off celebrity chef José Andres’ obsession with good ingredients. There are a few carefully constructed sandwiches — filled with Ibérico ham and Manchego cheese or Spanish potato omelet — along with a grilled strip loin with a fried egg, patatas bravas and a splash of mojo verde sauce. If you don’t want to think but want the food to be on point, this is your place. 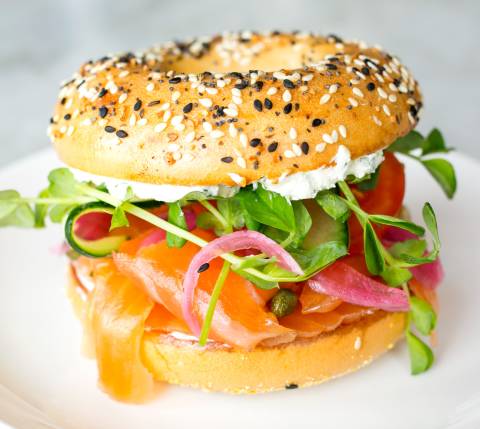 Chicago’s most celebrated farm-to-table restaurant is known for many delightful gifts to the food community: pasta yia yia that combines bucatini with brown butter, feta, and cinnamon; house salad with Werp Farm greens in a sesame and caper vinaigrette; and the Platonic ideal of a breakfast burrito that contains all the expected ingredients but is better than any you’ve ever tasted.

This local, three-unit chain is known for its large portions and even larger menu. On the sweet side, look for several varieties of crêpes, waffles, pancakes, and French toast. On the savory side, there are eggs Benedict aplenty and the signature breakfast bowls that start with a base of fried potatoes and finish with two eggs. 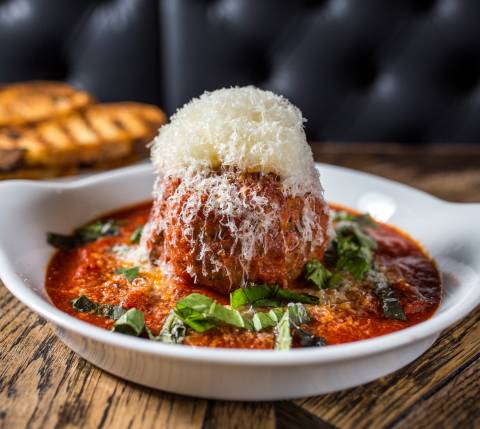 This ever-popular River North Italian spot has a something-for-everyone attitude that extends to brunch. Egg dishes (including lobster Benedict) share space with burgers and sandwiches, and there’s always pizza. When you’re feeling a little worse for wear on Sunday morning, these are some pretty appealing choices.

This Lake View spot is as well known for cupcake pancakes as for the hours-long wait to get inside. How much more pleasant to wait for the buzz that your brisket and gravy is here?

A perennial favorite open for more than 20 years, Sweet Maple offers a full cast of characters on its menu. Dr. Glenn is a scramble with ham, cheddar, and all the veggies. Carmen G.’s has bacon, spinach and mushrooms. Laurene (named after owner Laurene Hynson) is a plate of spicy chicken tacos. While there’s no name attached, the cinnamon roll pancakes are where it’s at.

This Near North Side stalwart is like a dear old friend who has never changed her ways. The tuna salads are scooped, the pancakes come in enough flavors to make IHOP jealous, and the club sandwich is a triple-decker geometry project. Go for a tuna melt — sorry, a “tuna volcano” glazed with cheddar cheese. 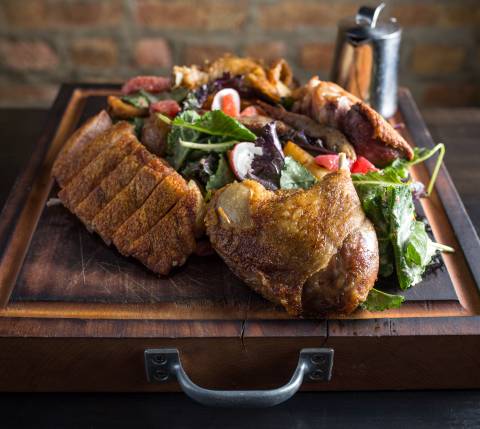 Kevin Hickey is a man who knows his way around a pot of grits and a big ol’ cathead biscuit. Order those grits as an entree with shrimp and fried chicken cracklins, or as a side to his whimsical Egg McDuckInn sandwich. But there’s no way you’re skipping that biscuit.

Former hair stylist Peytyn Willborn opened this elegant Bronzeville spot in 2015 and it quickly became a magnet for Black travelers exploring Chicago. Dinner is dandy, but brunch is the business. Go for steak and eggs or brioche French toast coated in flavor-infused batters. 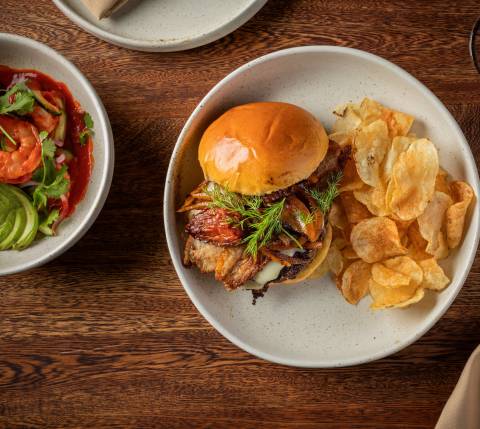 Carlos Gaytán’s much-lauded creative Mexican fare makes quite the appealing daytime showing. Look for dishes straight from his imagination, such as a rethinking of Middle Eastern shakshuka and, in a town that can never get enough chicken and waffles, his duck version stands out.

Unlike other locations for this beloved breakfast and brunch spot, the Test Kitchen in Wicker Park offers an extended menu filled with all kinds of fresh takes on pancakes, chicken and waffles, and breakfast sandwiches for every appetite. But we always love the create-your-own omelets crafted with rare skill — fluffy and folded over appetizing fillings. The 15 Best Steakhouses in Philadelphia The Most Popular Dishes in 10 Major Cities on Caviar The 20 Best Pizzas in Chicago on Caviar