Al Fresco Eats: Plan Your Next Picnic with Caviar

You’re gonna want to take it outside this summer with these spreads. Summer afternoon — the two most beautiful words in the English language. Here at Caviar, when we’re not paraphrasing Henry James, we’re celebrating the season with picnics galore. You don’t need a special basket or a lot of advanced planning to make the most of a warm, breezy day. Restaurants across the nation have deliverable dishes (mezze, charcuterie, oysters) for your next al fresco feast. One of Bon Appétit’s Best New Restaurants when it opened a decade ago, Yardbird still absolutely aces the fried chicken game. The Yardbird Fried Chicken for the Family feeds six (or more, really) and features two dozen pieces of their famous 27-hour brined crispy fried chicken (with a gluten-free option) along with a generous portion of mac ’n’cheese and plenty of biscuits. Enjoy a taste of New England in Millennium Park with a spread from Quality Crab & Oyster Bah. Start with a grazing platter of freshly shucked oysters and shrimp cocktail — or go all out with the King’s Catch Premium Shellfish Platter, which has all of the above plus crab legs. The Original Seafood Roll upgrades the lobster roll by fortifying it with Alaskan King crab and jumbo shrimp in addition to the generous chunks of sweet Maine lobster. The Seafood Wedge is a bright and refreshing salad, adding shrimp and lobster to the country club classic.

The iconic Kelly’s, family-owned and -operated since the ’50s, claims to sell more than a million roast beef sandwiches a year across its multiple locations. If you haven’t yet had one, we’re not sure what you’re waiting for. Each location roasts its own beef, slicing it thinly and placing it atop a freshly griddled bun. Every sandwich is made to order! This is picnic food at its best. And if not everyone in your group eats red meat, know that the menu also includes lobster rolls, salads, fries, and much more. Given their tendency to be a multiple-napkin kind of meal, cheesesteaks are actually perfect for casual outdoor eating. (Just maybe avoid wearing white?) We love Pat’s and Geno’s as much as the next Philadelphian, but Campo’s 12 types of cheesesteak are also deserving of attention. They are also renowned for their Italian hoagie, with Dilusso salami, ham capicola, peppered ham, pepperoni, prosciutto, and provolone with lettuce, tomatoes, and onions. They also have rolls and cold cuts and cheese available by the half-pound if you’d rather set out a make-your-own-hoagie situation.

Australian celeb chef Curtis Stone might run the Michelin-starred Maude in Los Angeles, but his style has always favored simplicity, something you can see at Gwen.The Meat and Cheese Lovers Box (one of a few great choices) includes a selection of charcuterie and cheeses, a sausage roll for two, housemade pickles and mostarda, crostini, a little truffled side (nuts or chips or breadsticks), and a bottle of Gimonnet Brut Premier Cru Champagne. In honor of the Australian, maybe enjoy this one at the beach? D.C. has one of the country’s best Ethiopian food scenes, as you’ll taste for yourself once you order from Family. The vegetarian Family Special platter and the Family Meat Special allow you to sample virtually everything on the menu — the lentils, the cubes of meat, the simmered veggies. Ditch the utensils; the meals are meant to be eaten with injera, an Ethiopian flatbread.

All hail the rise of Hawaiian cuisine on the mainland. At Ono, the popular fast-casual restaurant group, you’re going to want to say aloha to the generous family meal. Feeding four, the package comes with your choice of two proteins, such as Hawaiian barbecued beef or chicken, kalua pork, or white fish, among others, along with rice, macaroni salad, and a vegetable side.

You can get appetizers and a la carte plates here (and you should – please see the King Ranch chicken dip and Frito pie), but for an interactive outdoor meal, we recommend ordering brisket and pulled pork by the pound along with a whole chicken. A quart each of collard greens, mac ’n’ cheese, and potato salad complete the feast. Of course, you can eat tapas off of plates – but we like to graze on chorizo-stuffed dates in the great outdoors, thank you very much. Construct your own spread with family-size portions of the Chef’s Meat & Cheese Board, potato tortilla, and ham croquettes. Finish with an order of 25 churros with dulce de leche; there will be plenty for everyone in your party — plus enough to share with passersby who’ve stopped to admire the spread. 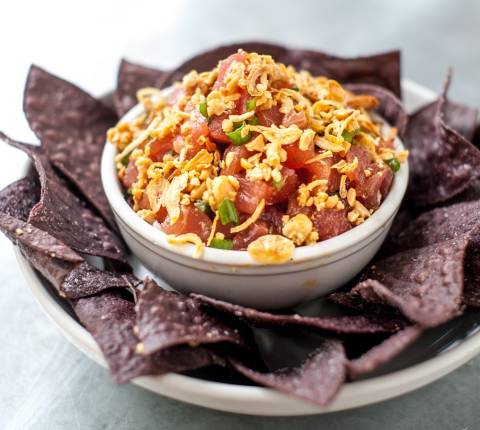 Is Poke the Ultimate Summer Dish? The Key to a Perfect Summer Cheese Plate The 12 Most Iconic NYC Dishes on Caviar